THANKS TO THE TELIA VIDEO PLATFORM SOLUTION, THE NEW RIGA THEATER SUCCESSFULLY MONETIZES THE ART FILM “AGENCY” IN OVER 60 COUNTRIES OF THE WORLD

At the outbreak of the pandemic, the New Riga Theatre (Jaunais Rīgas teātris – JRT) was one of Latvia’s most popular and most visited theatres, whose shows were also held in high esteem internationally, the pandemic-related restrictions introduced in the spring of 2020 forced the theatre to shut down.

In these circumstances, JRT came up with the idea of producing a serialised feature film that would involve all of the theatre’s actors, and provide an avenue for creative people to express themselves during the pandemic.

One of the challenges here was technological – looking for the simplest way for the film’s audience to buy and watch it online, while delivering the highest quality possible. Ensuring that any number of viewers can get a quality watching experience anywhere in the world was essential, and so was JRT’s need to turn this project into a success story, maintaining and increasing the loyalty of its audience, and benefitting financially.

From the very start, JRT decided to develop a dedicated website for watching the film online. The website was also planned as the main sales channel for viewers. Studio-grade content and copyright protection to prevent unauthorised access, copying and distribution, was set as the critical requirement.

JRT began working with Telia Latvija in the early summer of 2020 when having been presented JRT’s film project idea, Telia suggested to use its Video Cloud platform for video processing, hosting and streaming. Telia Video Cloud provides video content owners with easy video hosting, management, processing, streaming, protection and other multimedia functions that can be customised to the needs of both the provider of the content, and its audience.

A custom website was designed for the audience to learn about the movie, it’s actors and creators, view the trailer, sign-up for the purchase, obtain the access, and watch the video. Registered viewers with purchased access watch the videos in protected video pages which include the video player from the Video Cloud. All content protection features, including studio-grade DRM are enabled on the player preventing unauthorized access outside of the protected page.

Website is adjusted for usage on different devices like computers, smart phones, tablets, smart TVs and other compatible devices, e.g. Xbox One, Chromecast.

In addition to the development of the website, the video content of the film was prepared for streaming using the Telia Video Cloud platform, which included uploading (or ‘ingesting’), transcoding and converting it to a format suitable for streaming, and applying a DRM encryption to protect the content. Apple HLS and MPEG-DASH protocols are used for the streaming, enabling compatibility with as many devices as possible, making the film watchable on most modern smartphones, tablets, desktop computers, smart TVs and other smart devices.

The player provided by Telia Video Cloud has a convenient option for the viewer to choose between audio tracks and subtitles in different languages, making it possible to enjoy the content in the preferred language. This feature will come with JRT’s film starting in March, bringing it to people who don’t know Latvian. Aģentūra will have an additional audio track in Russian, and subtitles in Russian and English.

CDN (Content Delivery Network) technology is used to make JRT’s film available at any time, from anywhere on the planet, even when the number of concurrent viewers is high. An adaptive streaming function provides automatic selection of streaming quality depending on the internet speed, characteristics and performance of the viewer’s device in real time and automatically adjusts the resolution of the stream, so that the video can be streamed in the best quality possible, reducing lag and video buffering time to a minimum, thus delivering the best viewing experience for various devices and different internet connections.

The DRM (Digital Rights Management) function which is a part of Telia Video platform encrypts the content of video and prevents unauthorised distribution., DRM significantly reduces the options for piracy and the video can only be played by authorised users and devices, which in JRT’s case are those who have bought the film.

The use of DRM sets certain technical requirements for the device used to reproduce the video content, it has to be updated to supporting versions of software, e.g. browsers, DRM modules, etc. As DRM is a must for the premium content the requirement to update is a downside but according to Telia viewership quality monitoring subsystem reports, the number of such viewers is small.

Telia regularly monitors the experience of viewers to identify the devices where the watching experience is poor because of different reasons, and constantly works to eliminate issues and improve viewer experience.

JRT estimates show that so far, the film Aģentūra (The Agency) has been seen by 20 thousand people from more than 60 countries, which is a perfect demonstration not only of JRT’s ability to generate high-quality, interesting content but also of the possibility to successfully monetize such content on a global scale through technological solutions.

JRT comment: Our goal was to make it possible for our audience to ‘meet’ us while the theatre is closed due to the pandemic. Alvis Hermanis, the art director of the theatre, and the director of Aģentūra, came up with the idea of the film. The production involved the theatre’s entire team, resulting in a 10-hour film of 10 episodes. We sought a reliable and professional partner to make watching it possible. Having interviewed a few providers and looked into testimonials, we decided in favor of Telia Latvija. We are very satisfied with this partnership and its result. The audience interest during the very first few days post-release was incredibly high, and we are thankful to Telia Latvija’s team who worked 24/7 to provide technical support to us and our viewers. This is the first time a film distribution model like this has been used in Latvia, and we did face a few technical problems, which were tackled quickly and professionally. We are happy with the result of this work, and would like to thank our audience for their loyalty! 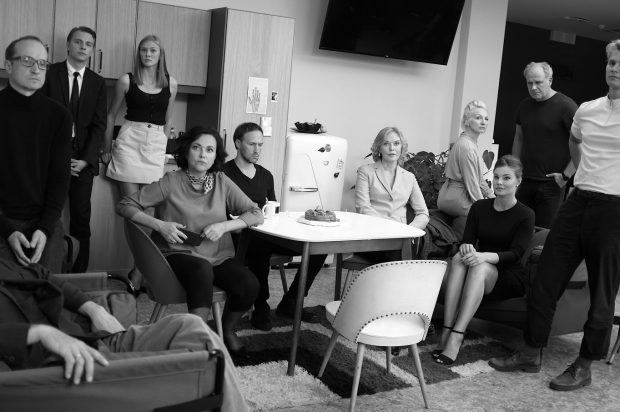