In order to facilitate the availability of remote studies, based on the cooperation between the Ministry of Education and Science and companies Telia Latvija and Veset, as well as television channels Sportacentrs.com and Re:TV, educational television channels Tava klase (Your classroom) and a digital platform for the transmission of content online and archiving were established.

“I am proud of the fact that Latvia has been able to present itself in a much better way than neighbouring countries and other European countries and countries of the world. On a daily basis we are maybe slightly inert and cautious, but when we face a crisis, we, as a nation, make up our minds and do things better than our closest neighbours. I am very glad about this,” says Mārtiņš Paurs, the Commercial Director of the information technology company Telia Latvija.

Upon the occurrence of the emergency situation and being aware of the challenges that we will face as parents soon, as well as finding a business opportunity, Telia Latvia proposed the idea to the Ministry of Education and Science. He adds that currently the company invests more in the project than it earns, but this is a good example to tell international markets about in the future, and this work will definitely pay back with interest. “We shared the idea for the first time with Dienas Bizness, as well as on 13 March during the press conference of the Minister of Education and Science, after which we also spent much time hearing recommendations from the representatives of the Latvian Association of Local Governments. During the next week, with the support of Veset, we had correspondence and phone calls with representatives of the Ministry of Education and Science, and the more we thought about it, the more confident we were ourselves that the project could succeed. We had positive feedback from everyone and the ministry continued to develop the idea, expanding the partnership and attracting Sportacents.com and the Latvian regional television Re:TV.

This is a perfect time – professional film recorders of Sportacentrs.com are less loaded, as currently there is nothing to film regarding sports, and such a project is also a great way to work during the crisis,” says M. Paurs. He adds that he is positively surprised that the Minister and the top public officials of the ministry are personally getting involved in giving certain, even technical tasks.

This interest is not only shown by Latvia.

The initial idea of the project provided 12 television channels – each channel for each class. But due to objective considerations, the project was scaled down to two channels. In order to reach all households and all children, who do not have smart devices or the internet, these channels have to be in free terrestrial broadcasting, but due to frequency limits, only one channel remained.

“Sportacentrs.com and Re:TV were ready to dedicate a part of their broadcast time, in order to transmit this content within the framework of their channels. Together with Veset, a Latvian company, which provides television channel exchange services to more than a hundred television channels across the whole world by their developed software, we provide the necessary computing and data storage resources on the Telia cloud computing platform, the formation of the television signal from recorded materials, transportation of the signal to Sportacentrs.com and Re:TV, as well as broadcasting in the internet environment. In parallel, we created the internet portal tavaklase.lv within a very short period of time. In relation to this, the challenge presented was that a portal had to be created, which still did not have any defined functional requirements, where an unknown large number of visitors was expected; besides the portal not only has textual information or basic pictures, but also high-quality video and live archives.

Professionals of all areas could involve themselves in this project – programmers, designers, IT administrators, our colleagues – parents or actual users. Upon operating in the media technology area for many years together with Veset, we were well aware of what to do and what technologies should be involved, and we created this portal,” says M. Paurs.

Thus, on the first day of operation – on 6 April- this site was visited by 75 thousand unique visitors. This is an unusually large number and much bigger than expected. He has heard that, for example, the basics of programming had not just been watched by students, and singing together with Renārs Kaupers attracted a broader audience.

It is still too early to talk about the popularity of the television channels Tava klase in the traditional – television format, however, the provisional data also look pleasing here. The portal is provided for students from grade 1 to grade 6, as well as from grade 9 to grade 12, which constitutes approximately half of the 216 thousand students in Latvia. After the operation of the portal for more than two weeks, M. Paurs emphasises that the site is visited by people from more than 50 countries across the whole world, which means that the families with children, who live abroad due to various reasons and do not wish to lose the link with education, language and content in Latvian, also have an interest in the education content in Latvian.

The audience is from Great Britain, the USA, Estonia, Germany, Belgium, Sweden, Russia, Ireland, Finland, as well as from Bolivia, Guatemala, Peru and New Zealand.

“This example clearly shows how the linear television and content on request are combined nowadays. We broadcast at the same time on all channels – overground, on cable televisions, streaming platforms, tavaklase.lv, archive. Only the application is actually missing.

Technically, we were more or less prepared for this, but the fact that all this, from the perspective of project management, financing, decision making and content production, was achieved in three weeks, is great. Everyone got together in the crisis and made it. Tavaklase.lv was promoted quite well, not only by the Latvian media, but also people on the social networks, because the visitors come from many countries,” says Gatis Gailis, head of the television technology company Veset.

Usually, development of the channel takes one or two months, but currently Veset also has customers, who make channels related to Covid-19 in a few days, but then content which is easy to produce, such as live broadcasts from culture events, is usually broadcast there. In the case of Tava klase, all content is created especially for this. “People of the industry know that it is possible to create a new television channel quickly and easily – all you have to do is film the content and prepare the content plan, because nowadays the television channel exchange technologies are available on the cloud, but the general public has the assumption that the creation of new television channels requires huge investments and planning for months,” says M. Paurs. He adds that the logistics of the content is one of the challenges. If the material has to be broadcast at 9:20 in the morning, then quite often it reaches professionals of Telia Latvija at 11:00 PM on the previous day. “That, of course, creates a bit of a worry as to whether we will manage to put it up, but we are also not afraid to make some mistakes – the one who does not do anything, does not make a mistake,” M. Paurs emphasises.

More than 70 teachers from across Latvia are involved in the creation of the content of Tava klase, supported by some popular people, singers and artists within the framework of the project. The Ministry of Education and Science highlights that Tava klase provides teachers with additional possibilities to vary their education process, but the fact of how the content should be included in the learning process and to what extent, remains under the competence of the school and teachers.

Not only for the crisis period

“There are countries, which think about television channels and which have already implemented them, such as Finland and the Czech Republic. But this is definitely on a scale such as we have, when we have created two completely new television channels. They dedicate a small part of the broadcasting time in the state television channel for education content, taking it away from something else,” says M. Paurs. He considers that these television channels may also continue to exist during the post-crisis time and may serve as support for students, if they need to learn at home or abroad. “The customer for this project is the Ministry of Education and Science, and they will have to make a decision regarding the future of this channel. As a parent, I would definitely be glad if such platform with video content would also be available in the future as a valuable auxiliary means for studies – the same as uzdevumi.lv, soma.lv or virtualaskola.lv, for situations when a child is forced to learn at home. A teacher may also get sick and lessons can be skipped. I think that this project also has a possibility to live in the future; this is an issue of funding from the customer,” considers M. Paurs.

G. Gailis indicates that this solution is to be scaled, and although there are two channels now, companies may also offer six and twelve.

The customer – in the particular case, the state – only pays for what is being used, because cloud technologies are mostly used. “The technology should not be avoided, it should instead be embraced, because it is neither complicated, nor expensive,” says G. Gailis. In turn, M. Paurs emphasises that the internet and streaming capacities in Latvia are sufficient.

“There have been discussions about the self-directed learning process for some time. The more that such easy-to-grasp, viewable, professionally prepared and accessible tools and sources of information are available, the easier it will be for a child to organise the learning process. Video format is one of the best ways to present the information. No book will enable you to understand complex material as well as a 20-minute narration of a teacher with visual aids on the screen,” says M. Paurs.

He says that several distance learning schools are successfully operating in Latvia, where Riga 1st Distance Learning High School is the biggest, implementing the education programmes corresponding to the standard. “For a number of years, we have been successfully organising the learning process by video, and this solution is a fully featured alternative to classroom studies for those who are unable to attend personally for any reason,” says Gita Vāvere, Director of Riga 1st Distance Learning High School. 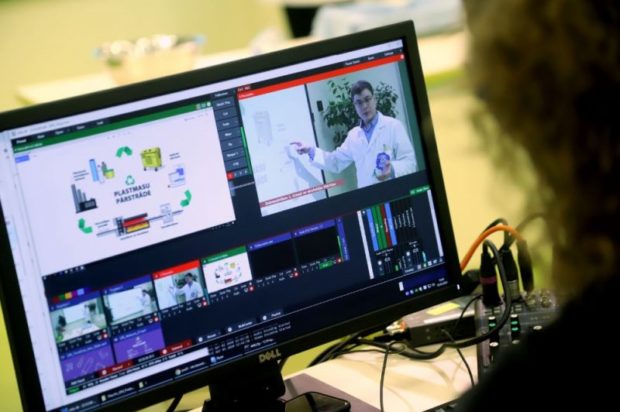